DIGITAL RUPEE on its way 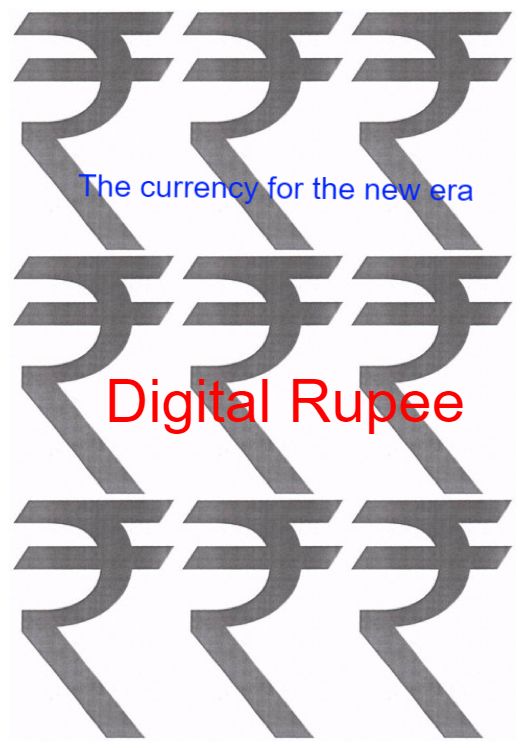 WHAT IS DIGITAL RUPEE ? and how does it work ?

Digital Rupee will be virtual currency or Digital currency   issued by Reserve Bank of India   ( RBI   ) . Its value will be same as Indian currency   . It will be  a virtual currency backed   by the central bank RBI in India    and hence  it will be as good as holding Indian Rupee  notes in your physical wallets .   It will be  , for all practical purposes   ,   cash held   in your mobile phones /  computers . RBI  will use  Blockchain Technology   to establish the framework for   the Digital Rupee  .

It will be just  a different form  of the Rupee note  . Digital rupee can be  converted in to cash anytime  without hassles .  As  Digital Rupee is another form of cash , it will not fetch any interest  on its balances .

In technical terms ,  Digital Rupee will be  a CBDC issued    in India by  her  central bank RBI  .

What is CBDC ?  : A CBDC is the legal tender issued by a central bank in a digital form. It is the same as a fiat currency and is exchangeable one-to-one with the fiat currency. Only its form is different.
FOR  THE LATEST  INDIAN NEWS ON CRYPTOCURRENCIES , CLICK HERE

WHAT IS THE DIFFERENCE BETWEEN DIGITAL RUPEE AND CRYPTOCURRENCIES ?

It is reported that there are more than 7800  private cryptocurrencies available  in the world .  The major five  cryptocurrencies are   Bitcoins ,  Ethereum , Binance ,  Tether and Cardano  . Most  of them use  Blockchain technology      and RBI' s  Digital Rupee will also  use the same Blockchain Technology  .    All  are  digital currencies  , run on computer platforms and have no physical  presence , just like   Digital rupee envisaged . But similarities stop here .

Major Difference  between  Digital Rupee  and other private cryptocurrencies :

1.  ISSUERS  :  There is no ISSUER  for the  private cryptocurrencies  and  are not convertible one-to-one into any   sovereign currency    .  As there is no need   to take any permission   from anybody  to establish a  cryptocurrency framework    , the systems are  uncontrolled   . We don't know the reliabilities  of the   promoters , systems used  or  the the details of frameworks used   . Most   of   the cryptocurrencies   use open source  & cloud computing and the  Digital Rupee will be  issued and controlled by  by  Reserve Bank of India ( RBI )   .   RBI takes charge of the Digital Rupee as central authority  and they are   responsible    for the system.

2. TRADABILITY   :    The private cryptocurrencies have  no  intrinsic value , as they are not backed  by any assets  . They find their values in markets through   being traded in  ( Cryptocurrency ) Exchanges  . Hence   they   have no fixed value   and   are subject to frequent fluctuation , valuation   and  speculation   .   Hence such cryptocurrencies are    held for the purpose of  investment    expecting profit from   the change in values . But  Digital Rupee     is  controlled and backed by RBI which has fixed its value to  equivalent to  Indian Rupee   notes  / coins issued  by them  .   As   the value is fixed  ,  it will be not be  traded .  It will be used as  a payment instrument .  However   its value will fluctuate    with other overseas currencies  in tune with Indian Rupee quotes.

Hence   private cryptocurrencies and Digital Rupee serve different  purposes and  have different uses  and hence   are not  comparable in stricter terms.

WHAT IS THE DIFFERENCE BETWEEN DIGITAL RUPEE AND WALLET RUPEE ?

Digital wallets  in Rupee  terms  or PPI ( Pre-paid Instruments )  are issued by many  Banks and Non-banking services, like Amazon , PAYTM , Ola money etc   under  the approval of Reserve Bank of India (  RBI  )  . There are two types of wallets issued   KYC -compliant and KYC non-compliant  .  There are rules and regulations issued by RBI   governing issue , operations and balances in such   wallets  for each type  of wallet.

All wallet  cash   are issued in Indian Rupee  and they   are issued  in Rupees  only and hence values are fixed  along with Indian Rupee  .   The  wallet is not   considered by DICGC cover  as they are not treated as  deposits with banks  .  These wallet rupees should   not be confused  with  cryptocurrency wallets   that stand differently .

While wallet cash in rupee are authorized   by RBI  , Digital Rupee will be issued by RBI  with full sovereign backing  . Hence they will be more safer than the wallet cash .

1.  Presently  RBI is spending around  Rs 3  per piece of note  it prints . Further  it has to bear the cost  of holding , distribution , exchange   and reprinting   after lapse  of  certain period .  By issuing  Digital  Rupees  , RBI will be saving all   such costs .

2. Control  of  Entire stock of Digital Rupees will remain with RBI  and hence RBI will save its efforts  on  accounting the stock   ,maintenance   of stock , distribution   of tock   .

1. Public need not worry of holding different  denominations    of  cash   as they can  make payment   directly  from  their  Digital rupee holding   .
2.   Dependency on physical cash  along   fear of holding fake currencies    and fear  of losing physical cash by theft , fire , flood  etc will reduce .

2. Unproductive  holding of large cash reserves will  come down .

DISADVANTAGES   : As  RBI is yet to announce   modus operandi of operations of Digital rupee    , we can  assess  the problems associated  in managing such digital currencies   will come to open  when it becomes operational .

When Digital Rupee will be launched ?

RBI is yet come out  with Guidelines , Rules  and Regulations   , Operational framework and modus  operandi of the system  .  We will update the information   when   RBI announces them .

RBI IS MULLING OVER ITS OWN CRYPTOCURRENCY  :  DG

Dated 23.07.2021 :  Shri T Rabi Sankar, Deputy Governor, Reserve Bank of India  , has  advised , in a webinar organized by Vidhi Centre for Legal Policy, New Delhi , that RBI  is  also exploring , like other  central banks  , the pros and cons of introduction of CBDCs  (  “Central Bank Digital Currencies  )  since quite some time.  He also disclosed   that the High Level Inter-Ministerial Committee (November 2017) constituted by Ministry of Finance, Government of India (GoI) to examine the policy and legal framework for regulation of virtual / crypto currencies had recommended the introduction of CBDCs as a digital form of fiat money in India.

In   his  speech , he touched   some of the issues relating  to  digital currency as below "

What is CBDC ?  : A CBDC is the legal tender issued by a central bank in a digital form. It is the same as a fiat currency and is exchangeable one-to-one with the fiat currency. Only its form is different.

2 . Jurisdictions with significant physical cash usage seeking to make issuance more efficient (like Denmark, Germany, or Japan or even the US);

3. Central banks seek to meet the public’s need for digital currencies, manifested in the increasing use of private virtual currencies, and thereby avoid the more damaging consequences of such private currencies.

4. CBDCs have clear advantages over other digital payments systems – payments using CBDCs are final and thus reduce settlement risk in the financial system.  The need for interbank settlement disappears

Why  RBI and other Central Banks   mulling over CBDC ?

The advent of private virtual currencies (VCs) may well be another reason why CBDCs might become necessary. It is not clear what specific need is met by these private VCs that official money cannot meet as efficiently, but that may in itself not come in the way of their adoption. If these VCs gain recognition, national currencies with limited convertibility are likely to come under threat. To be sure, freely convertible currencies like the US Dollar may not be affected as most of these VCs are denominated in US Dollar. In fact, these VCs might encourage the use of US Dollar, as has been argued by Randal Quarles3. Developing our own CBDC could provide the public with uses that any private VC can provide and to that extent might retain public preference for the Rupee. It could also protect the public from the abnormal level of volatility some of these VCs experience. Indeed, this could be the key factor nudging central banks from considering CBDCs as a secure and stable form of digital money. As Christine Lagarde, President of the ECB has mentioned in the BIS Annual Report “… central banks have a duty to safeguard people's trust in our money. Central banks must complement their domestic efforts with close cooperation to guide the exploration of central bank digital currencies to identify reliable principles and encourage innovation.”

The effect  of CBDC  on Banking System :

1. CBDCs, depending on the extent of its use, can cause a reduction in the transaction demand for bank deposits. Since transactions in CBDCs reduce settlement risk as well, they reduce the liquidity needs for settlement of transactions (such as intra-day liquidity). In addition, by providing a genuinely risk-free alternative to bank deposits, they could cause a shift away from bank deposits which in turn might reduce the need for government guarantees on deposits (Dyson and Hodgson, 2016).

2. At the same time reduced disintermediation of banks carries its own risks. If banks begin to lose deposits over time, their ability for credit creation gets constrained. Since central banks cannot provide credit to the private sector, the impact on the role of bank credit needs to be well understood. Plus, as banks lose significant volume of low-cost transaction deposits their interest margin might come under stress leading to an increase in cost of credit. .

3. There is another risk of CBDCs that could be material. Availability of CBDC makes it easy for depositors to withdraw balances if there is stress on any bank. Flight of deposits can be much faster compared to cash withdrawal. On the other hand, just the availability of CBDCs might reduce panic ‘runs’ since depositors have knowledge that they can withdraw quickly. One consequence could be that banks would be motivated to hold a larger level of liquidity which could result in lower returns for commercial banks.

4. In actual fact, notwithstanding the benefits of CBDCs vis-à-vis bank deposits, since CBDCs are currency and therefore do not pay interest, their impact on bank deposits may actually be rather limited. Depositors that require CBDCs for transactional purposes are likely to sweep day end balances to interest-earning deposit accounts.

Which countries have issued CBDC ?

It is  reported that  Nigeria,   Bahamas and 7 Caribbean countries  have launched their CBDC  fully . Two other countries  namely  Senegal &  Ecuador have issued & cancelled   their CBDC   .   Countries like China , France  , Canada  , Ghana , South Africa  , U.A.E ,  Saudi Arabia , Uruguay and   Singapore   are running their Pilot  project .  Another 81 countries are  having their research   on introduction of their  CBDC .

We are not SEBI  registered advisor and the the articles contained in the website , including this page , is not an investment advice .   The articles here contain links to various external   sites .   We have not verified  the  authenticity or correctness of claims made on those sites .  We will not be responsible for  any    action taken  , any deals done or any other commercial transaction  on those sites . We  cannot be held for any loss arising out  of your investment  made as per the article . ​
gtag('config', 'UA-58106459-1'); google-site-verification: google10cfb8f922379475.html