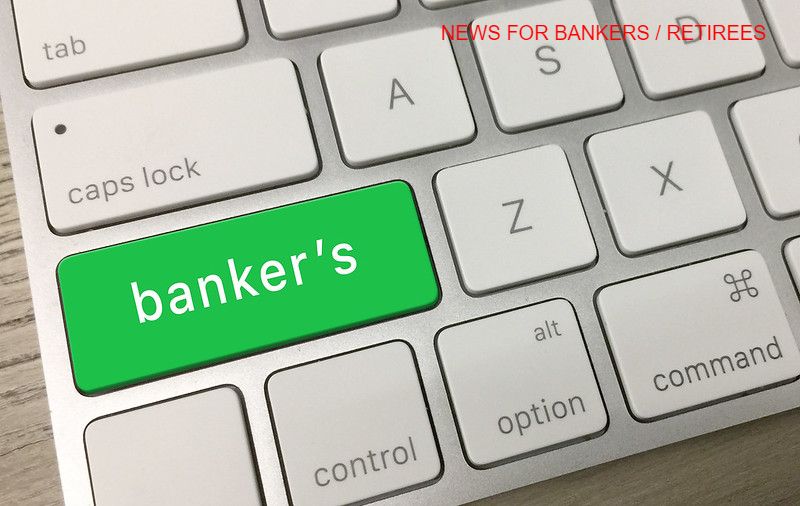 PLAN N PROGRESS CREATES  NEW PAGE FOR EXCLUSIVE NEWS FOR BANKERS AND RETIREES
We have found that we have a large number readers belonging to banking and financial sectors  and retirees  from the financial sectors      .  To help  such of our readers , we have created this  page that gives exclusive news  relating to their  financial well-being   , their expectations and reality of the situation .  This page will contain news  that , we believe , interests them  . Hope our new initiative   will be liked by our readers fraternity
BANKERS  DEFER  THEIR STRIKE PLAN

Now they have deferred their strike plan in view of positive developments  in their talks with IBA held .  It is reported that IBA has now offered 15 %  rise  in the pay slip cost  .

Bankers have to wait for   further announcements from UFBU / IBA to know  full developments  .
BANKERS ON STRIKE PATH  FOR FULFILLMENT OF THEIR  DEMANDS

The bankers demand include

7.          Allocation to Staff Welfare Fund based on Operating Profits

8.          Exemption from Income Tax on retiral benefits without ceiling

​Source :  AIBOA Website
LIFE CERTIFICATE  TO BE SUBMITTED BY BANK PENSIONERS IN NOVEMBER

Pensioners / Family pensioners   may visit  the   branches of the banks  for doing the needful   and   to  continue to receive  their pensions uninterrupted .
RETIREE BANKERS GROUP  HEALTH INSURANCE POLICY - ONE MORE OPTION

Dated 24.10.2019 :  United India Insurance Company has  agreed to provide one more option  for Retiree bankers who had not opted to  be part of or discontinued  the group health insurance policy earlier . The last date to enroll  is  28.10.2019 .  All the terms & conditions and premium quoted will be same  as   that of existing  retirees  who are members of the scheme already . However  there will be a waiting period of 30 days  from the date  of commencement  of policy that is 1st, November 2019  and hence policy benefits can be availed only from 1st , December 2019   .
​
Interested retiree bankers who wish to join the scheme now can   contact their banks   for further details .

01.10.2019 : Indian Bankers Association ( IBA ) conveyed to member banks the new offer / quotation issued by United India Insurance Company for the renewal of group health insurance policy to retired bankers effective from 01.011.2019. The renewal premium is around 15 % higher than the current year premium . As reviewed last year , this year also we checked the internet to find if any alternative plan is available to the plan offered by united India Insurance Company . In the quotation of UIIC , we find that additional premium amount for domiciliary is more than the insurance amount eligible for total domiciliary claim .
To know various options available for retiree bankers . read the article

AIBEA AND BEFI  TO  JOIN  STRIKE  8TH AND 9TH JANUARY

Dated  06.01.2019 :   All India Bank Employees Association ( AIBEA  ) and  Bank Employees Federation of India ( BEFI )  have  given    call to  their  members who are employees and officers of various banks   to participate in a nationwide  strike   on 8th and 9th January 2019   in support of a  call  given by 10  major central trade unions  . The call  given by   INTUC, AITUC, HMS, CITU, AIUTUC, AICCTU, UTUC, TUCC, LPF and SEWA  is for opposing alleged anti-worker policies of central government .

Dated  29.12.2018 :   Finance Minister Mr Arun Jaitley  informed parliament  on 28.12.2018  in a written reply that   6,049 bank officers in nationalised banks were held responsible for loans  turning bad  in fy 2017-18  and   were  penalised with minor and major penalties  including dismissal , compulsory retirement , demotion  for their lapses .  Further in some cases CBI and police cases have been filed against them for the  deficiencies  , depending up on the gravity of cases .

Editor's Note :    The news  acts as  morale spoiler for bank officers  and it may increase the tendency  to avoid / delay taking decisions  on loans  .  Further  such tendencies   will  hamper the gowth of banks and   credit growth in the country will be curtailed .  Ultimately  country's overall economy  will also be a  casualty  .  Instead  training bank officers  for better apraisal of proposals  and follow-up will help the banks grow  their credit portfolios in a  healthy way .
BANKERS TO GO ON STRIKE ON 26TH DECEMBER

Dated  18.12.2018 :   United Forum of Bank  Unions (  UFBU )  has given a   call to  its members who are employees and officers of various banks   to participate in a nationwide  strike  in banking industry   on 26th , december 2018 . UFBU  compromises of   various bank unions like AIBEA , AIBOC , NCBE , AIBOA, BEFI , INBOC , NOBW and NOBO  with acumulative membership of more than 10 lakh bankers .

The strike call is  to oppose govenment move to merge three of  public sector banks  Bank of Baroda , Dena Bank  and Vijaya Bank  .  UFBU is  also seeking  steps to  recover bad loans from corporates  to save banking industry from collapse .

​The strike will be preceded by  a  nationwide demonstrations in major cities .
EXTENDED LAST DATE FOR RENEWAL OF GROUP HEALTH INSURANCE   PLAN FOR BANK RETIREES  ​
Dated  08.11.2018 :   United India Insurance  Company has agreed to extend  the  renewal of  group health insurance  plan for  those  retired bankers   who had not paid  renewal premium  before the stipulated  deadline in October 2018   . The new  deadline fixed is 14.11.2018 . However for the  retirees who  renew their health coverage  now , the coverage starts only from 16.11.2018  , but will end simultaneously  on 31.10.2019   as per   the earlier  plan .     For this effect , the   retirees opting for renewal   will be required to submit a declaration agreeing for the new condition .

Source :  ARISE
​GROUP HEALTH INSURANCE FOR BANK RETIREES
​
For the benefit of bank retirees , PLAN N PROGRESS  compares various prominent health covers available for senior citizens from leading health insurers like Star Health , Religare , HDFC Ergo , Apollo Munich etc with the group cover of United India Insurance Company through IBA . It analyses the premium for retirees of various ages from 61 to 81 years on individual basis as well as floater . To know which is the cheapest for you to decide on the merits / demerits of shifting to a new policy     ,  CLICK HERE

Dated 10.10.2018 :  Indian Bankers Association  ( IBA )  vide their circular dated 09.10.2018  has advised   member banks to renew   the group insurance health policy  for the interested retirees   , on their paying quoted premium ,  from 01.11.2018 to 31.10.2019   as per the new quotation      issued by public sector insurance company United India Insurance Company     . However circular  leaves the choice  to the member banks for seeking quotation from any other insurance company  and approving any other scheme at their level .    The  room rent charge has been restricted to Rs 4,000  per day in the renewal proposal .
One can go through the revised  rates    which are  available in the enclosure to the above circular  and highlights are as follows  :

WITH OR WITHOUT ENTRY AGE RESTRICTION

Dated  07.10.2018 :   It is reported that  the following  alterations in the terms  have been made   for  the renewed health policy taken by  members of Indian Bankers Association  for their serving  employees / officers  under IBA GMC Employee Policy  with United India  Insurance Company   :

1.  Room rent  is limited to Rs 4,000 /-  per day from existing limit  of Rs 5,000/- per day .
2. All bills / receipts for purchase of medicines  upon which a cliam is made shall bear the valid GST number of the issuer of such bills  / receipts .  This condition is applicable to both hospitalisation and domiciliary    ( OPD ) claims  .

Dated  30.09.2018 :   It is reported that  Indian Bankers Association ( IBA  )  in a  Negotiating Committee meeting  with representatives of bank officers / employees under the banner of UFBU (  United Forum of Bank Unions )  held   on 29.09.2018   advised its inability to increase the wages   beyond 6 %  proposed earlier  , keeping in view of the present health of the member banks .  However it would like to consider performance linked compensation beyond the settled pay structure based on  financial health   and paying capacity  of the  individual  member banks  .   For the purpose ,  IBA  would like to classify the member banks in to three categories  based  on operating profit and Return on Assets  ( ROA )  .  The additional  compensation  based on performance of each bank will  be disbursed after the balance sheet of the previous year  is published    and  meeting   the performance  criteria agreed earlier .

It is also reported that UFBU has rejected the offer  and  UFBU   would like to continue with the existing uniform pay structure .

DATED  18.09.2018 :         News papers reported that  Mr Venkatachalam , the General Secretary of  All India Bank Employees Association   ( AIBEA )    has  opposed the move of  the government to merge three public sector  banks  announced by  Finance Minister Mr Arun Jaitley   .  He advised that that there was  no evidence to show improvement of efficiency of banks on merger . He cited the example  of state bank where total NPA has gone up after merger  , bank has turned to loss and    staff have reduced  .  He averred that need is expansion of public sectors banks and not merger .
NEW  BLOG  ARTICLE ON
HEALTH INSURANCE  OPTIONS FOR RETIRED BANKERS
​
The article explores the alternative avenues for existing health insurance group policy for Retired Bankers

DATED  18.09.2018 :           The Government of India   has proposed to merge   the three public sectors banks  Bank of Baroda , Vijaya Bank  and Dena Bank in to  a single entity which will be  the  third largest bank of India  , as announced by the Finance Minister Mr Arun Jaitley  yesterday .  This will be the second move of merger of public sector banks  , the first one being merger  of   group banks of State bank of India .  Now the boards of the three banks have to consider the proposal  of merger , which will be a just formality .

Dated 19.07.2017 :    In the wake of rumours floating  over  weak banks  , Mr S.S. Mundhra , Deputy Governor of Reserve Bank of India has  recently  urged people  not to fall prey to  falsehood of misleading news    about  the future  of weak banks  .  He has told that notion about  impending collapse  of banks due to poor asset quality  is misleading  and RBI has  included  certain banks for Prompt Corrective Action ( PCA )     for improvement of their asset quality .  He also told "  PCA will not imply that banks will cease normal banking activities  including lending "

The list of bankers under  PCA include IDBI Bank , Central bank of India , Indian Overseas Bank , Bank of  Maharashtra , UCO Bank and Dena Bank  who have higher Non Performing Assets and making losses in recent times .     Banks under PCA   have restrictions on issuing of dividends , opening branches , hiring and   giving loans to companies rated below investment grade .   . However it does not hamper  day to day banking .

. The Deputy Governor expressed his displeasure over  social media messages spreading   false news   about the future of some of the banks .Unsubstantiated rumours  around  these banks , mostly carried in social media   , suggest closure of some of the banks or mergers  with other  public sector banks   which has made  customers of these banks panicky .  Some messages have gone to the extent of asking viewers to   withdraw deposits and close their bank accounts  with these banks .   The finance minister had earlier stated  that  India needs  five or six global sized banks  and it is expected that  mergers of some of the Public sector banks  will take place in order to build bigger banks .    Recent merger of State bank group entities in to State Bank of India  is   giving credence   to the possibility of further mergers .
OUR OPINION :
Customers of banks need  not  panic about the rumours as   Reserve Bank of India has not allowed any major bank to fail in recent history .    Even when mergers have taken place , RBI   has taken sufficient steps  to safeguard the interest of the  customers of the weak banks   which were merged with bigger / stronger banks .   We hope the statement of Mr S.S.Mundhra will bring clarity on the situation .

WEBSITES OF  BANKS  / BANKERS ASSOCIATION   / RESERVE BANK OF INDIA    ( CLICK ON THE NAME TO GO TO THE WEBSITE )
1. Reserve Bank of India

4. To go to websites of individual banks   , CLICK HERE
WEBSITES OF EMPLOYEES / OFFICERS   UNIONS / ASSOCIATIONS
​ ( CLICK ON THE NAME TO GO TO THE WEBSITE )
1. All India  Bank Employees  Association   ( AIBEA  )

​5. Bank Employees Federation of India   ( BEFI )
WEBSITES  OF    VARIOUS  ASSOCIATIONS OF   RETIRED BANKERS
​ ( CLICK ON THE NAME TO GO TO THE WEBSITE )
All  India Bank retirees Federation